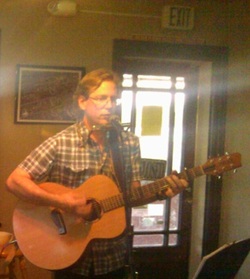 _ Jeff Williams grew up in Colorado and has been playing and writing songs on his guitar for over 35 years. He lived in California (Bay Area and Santa Cruz) for many years where he had the opportunity to play with many wonderful songwriters and bands while perfecting his own musical style. In addition to playing in clubs, coffee houses, small concerts and on live radio, Jeff enjoys most the simple pleasure of taking guitar and pen in hand and writing a new song. Some of Jeff's favorite musicians and influences are Nick Drake, Ron Sexsmith, Niel Young, and Bruce Cockburn as well as many others including Richard Shindell and Jeffrey Foucault. Jeff is also a guitarist for the Denver rock band INOTIO and loves to go see good friends Lucky and Lefty, the South Side Jazz Project, Stiffwater and Trust No One perform around Denver often.