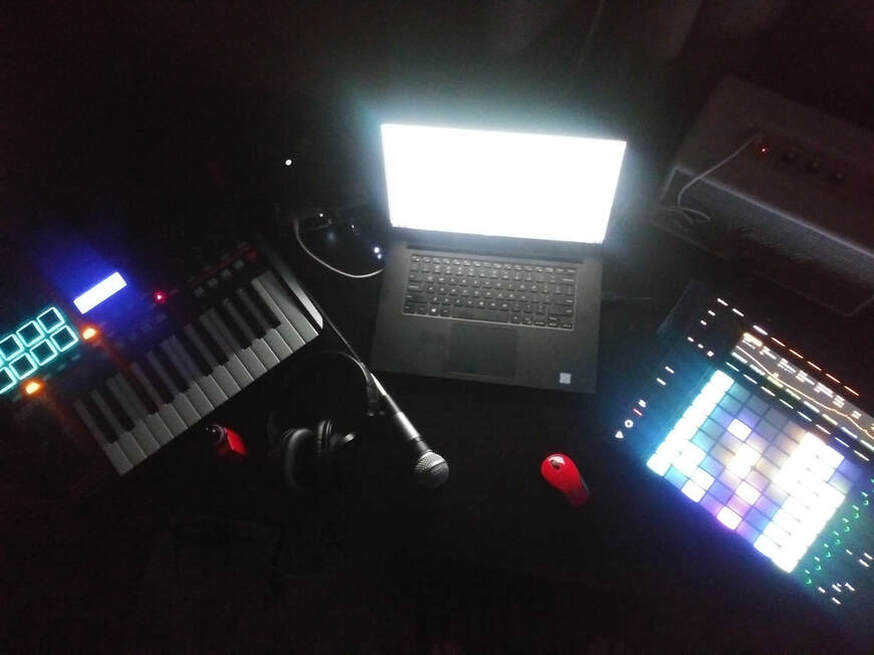 Starting in 2018 I began to become interested (obsessed?) in making electronic music. For years I had been listening to ambient electronic on various Internet radio stations, sometimes just having the music playing in the house 24/7. I love the head space it puts me in. Not that I became disinterested in other genres of music - far from it. It's just that I had been writing, performing and following the same old music for so long that nothing seemed new or fresh to me.

Also, in 2014 I was diagnosed with cancer in my throat. I ended up losing my left vocal nerve that controls my vocal cord on the left side, so I am only able to use my voice for talking now - no more singing. I was looking for new ways to create music, other than the singer-songwriter stuff I had been doing for so long.

Electronic music was where I ended up. I love how I can create beautiful musical soundscapes that are every bit as expressive as the words I used to write and sing. I have even been experimenting with using my voice in some of the music - not rapping, but more like spoken word poetry put to music. I like where it is taking me.

If you like electronic music, this part of my site is where I will probably be posting the most stuff for a while - so check back often, as I will hopefully have new material to share pretty frequently.

The main tools I am using right now are the Ableton Live 10 Suite, the Ableton Push 2 controller, and an AKAI Professional MPK 225 controller/keyboard, VCV Rack (which is a virtual Eurorack modular synth DAW,) Ardour, and Bitwig Studio (I LOVE LOVE LOVE Bitwig Studio!!!!!). For recording traditional band music, such as vocals, guitar, bass, drums, etc., I also like using the amazing and inexpensive Reaper. The laptop that I use to run everything on is a dual-boot Windows/Linux system with an dedicated NVidia graphics card, a terabyte solid state drive, and 32GB of RAM. Even though I have to use Windows in order to run Ableton and use the Push 2 controller, I much prefer my Linux environment for the superior performance and stability. Everything I use, except the Ableton products, runs on both platforms. My Linux operating system is the Ubuntu 20.04 (Kubuntu) release, which runs the KDE Plasma Desktop, with the Ubuntu Studio environment installed on top. This setup works wonderfully for recording due to the Linux low latency kernel, and the flexible Jack Audio Connection Kit which allows me to route MIDI and audio between multiple software applications and hardware.

One dream I have is to soon become proficient enough with my Ableton and other gear to play live and put on performances that combine electronic and traditional instruments, with film/video, dancers, artists painting, singers, poets reading - all on the same stage in a big blended scene performance that is spiritual, uplifting, and a mind blowing experience to be a part of for both the performers and the audience.

UPDATE: A couple of weeks before the COVID lockdown began, I played a set of my electronic music at an electronic music open mic at a local venue in the Denver area. Me, and one other guy (who was awesome!!) were the only two there who were making the style of music like I do. We were plugged into the night with several very intense Dubstep folks that shook the house!!! and I very much enjoyed their sets. I was encouraged, and relieved to find that my music (and the other performer playing similar material) was very well received. I got a lot of really great feedback. So I feel like there is an audience out there for live ambient music - and I plan to seek out venues and opportunities to perform after this lockdown lifts. In the meantime I am planning to live stream a performance on Facebook or YouTube soon. So I hope to see you online and in my virtual audience when that happens.